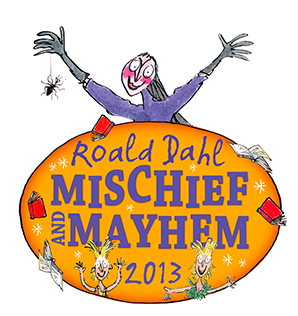 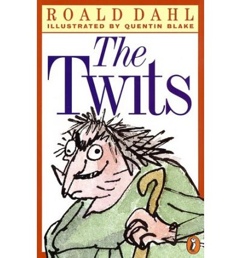 How do you outwit a Twit? Mr. and Mrs. Twit are the smelliest, ugliest people in the world. They hate everything — except playing mean jokes on each other, catching innocent birds to put in their Bird Pies, and making their caged monkeys, the Muggle-Wumps, stand on their heads all day. But the Muggle-Wumps have had enough. They don’t just want out, they want revenge.

This is the second book that I read during Roald Dahl Mischief Mayhem 2013.

The Twits are horrible people who do disgusting things. Mr. Twit is a hairy man who never takes a shower. He’s ugly and smelly.
Mrs. Twit is as ugly as her husband. She was a nice looking girl before, but she gets uglier and uglier each year. She carried a walking stick to hit animals and small children.
Mr and Mrs Twit love to do tricks. Mr Twit hid a frog under Mrs Twit’s blanket, and Mrs Twit put a handful of worms and mixed it with a plate of spaghetti for her husband.
To pay Mrs Twit back for the worm-spaghetti incident, Mr Twit added a piece of wood, bit by bit until the stick was getting longer and longer. Mr Twit said that Mrs Twit was shrinking. A very nasty trick. To prevent the shrinking, Mr Twit said that Mrs Twit should stretch. And horrible things happened over and over again.

It’s a quick read, only 76 pages. The moral lesson from the story is very simple: horrible things happen to horrible people.

If a person has ugly thoughts, it begins to show on the face. (p. 9)

A housewife, a mother, a passionate literati, a writer, a tea addict & occasional traveler. I also translate some articles for a business magazine. I'm a contributor for Writer's Magz Indonesia.
View all posts by lustandcoffee »